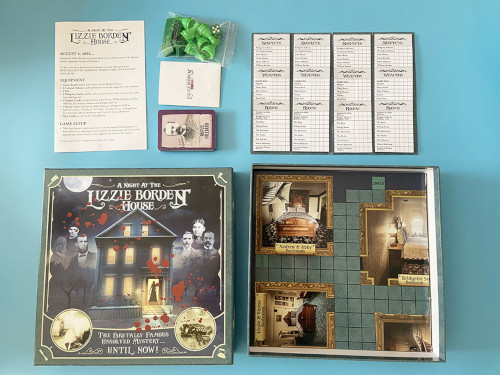 The Lizzie Borden Murder Mystery Game is a fun, Lizzie-Borden inspired board game that will provide you and your friends or family hours of grizzly entertainment. Order now.

August 4, 1892…
Andrew & Abby Borden are found dead in one of the rooms of the Borden house – apparent victims of foul play.

To win, you must determine the answers to these three questions: WHO KILLED THE BORDENS? WHERE WERE THEY KILLED? AND HOW?

If a player is Lizzie Borden, she goes first. The order of turn for the players then continues clockwise around the table. On each turn, a player tries to reach a different room of the house to investigate.

To start your turn, move your token by rolling the die or use a secret passage when you are in a corner room.

If you roll the die, you move your token that many spaces:

If you move through a secret passage, you don’t need to roll and you can move immediately to the other room. This ends your movement. It is possible that your opponents might block any and all doors and trap you in a room. In that case, you have to wait for someone to move or
un-block a door to leave!

When you enter a room, you can make a suggestion by naming a suspect, murder weapon and the room you just entered. e.g. “The crime was committed by John Morse in the barn with a hatchet”.

The named suspect and weapon are moved into the room you entered. Then your opponents (starting by the left player) must (if possible) prove
that your suggestion is false by showing you one card that matches your suggestion.

If the first player can’t disprove, the next player must try it, etc. .. until all players have passed.

As soon as someone shows you one of the cards, it is prooved that it can’t be in the envelope and you can cross it off in your notebook as a possibility.
If no one is able to prove your suggestion false, you may either end your turn or make an accusation.
Note: the suggestion is always made for the room your token is at that moment.

If you think you have solved the crime (by deduction), you can end your turn by making an accusation and name any three elements. You can say: “I accuse (suspect) of committing the crime in the (room) with the (weapon)”.
Then, you must look secretly at the cards in the envelope to check if your suggestion is correct. If you are correct, you can place the 3 cards face-up on the table to prove it and you won the game!
Note: You can only make one accusation during a game. If your accusation is wrong, you lost and you must leave the game (and board).

You win the game if your accusation is completely correct – that is, if you
find in the envelope all three of the cards that you named. When this
happens, take out all three cards and lay them out for everyone to see.

LIZZIE A. BORDEN – Born July 19th, 1860 in Fall River, Massachusetts to the late Andrew Borden and his first wife, Sarah M. Borden. Although many find it hard to believe a woman could be capable of such vicious murders, Ms. Borden remains at the top of the suspect list. As the daughter of the wealthy Mr. Borden, there is financial gain for her in the event of his death. Or perhaps this is a result of a woman being pushed to her limits after years of being forced to live well below their means by her frugal father? Whatever the reason, she offers suspiciously serendipitous explanations for how she managed to miss both brutal attacks. She places herself within very close proximity to both victims at the estimated times of death. Was Lizzie really in the right place at the right time, narrowly avoiding the bloody scene? Or is this perhaps the calculated story of a cold-blooded killer, anticipating that the people underestimate her due to her feminine nature?

JOHN V. MORSE – Born July 5th, 1833 in Somerset, Massachusetts, the younger brother of Mr. Borden’s first wife, Sarah Morse Borden, and Uncle to Lizzie and Emma. Morse currently works as a livestock trader after retiring from a long career as a butcher. Needless to say, a man of his experience would know his way around a hatchet. Despite relocating to Hastings, Iowa nearly 25 years prior, Mr. Morse arrives at the Borden household the evening before the murders. One can not help but find it suspicious that Mr. Morse arrived completely unannounced without even so
much as a single piece of luggage, or a change of clothes for the next day. Rumor has it that Morse had an unfortunate business dealing with the late Andrew Borden, resulting in bad blood between the two men. Morse offers an incredibly detailed alibi for the morning of the murders, including full names of strangers, license plates of trolly carts, and many other intricate
pieces of information. Why would someone need to memorize such small details unless in an attempt to cover one’s tracks later on? Were these murders the revenge of a scorned business partner? Is there a bloodthirsty killer lying beneath his calm and cool temperament?

WILLIAMS. BORDEN – Born April 20th, 1854 in Fall River, Massachusetts, laborer and peddler. Borden is rumored to be the illegitimate son of Andrew Borden and his sister-in-law Phebe Borden, born out of wedlock and dismissed to secrecy. William has a history of mental illness and has spent most of his adult years in an asylum. Many who know him speak of his antisocial behavior and tendencies to threaten violence with his favorite tool; his hatchet. It is rumored that Andrew supported his care financially, until one day he was cut off and disowned. After years of being hidden in the shadows as Andrew’s dirty secret, was this the final straw that caused William to snap and give in to his violent tendencies? Was this already unstable man finally unhinged, resulting in the blood bath on Second Street?

BRIDGETTE “MAGGIE” SULLIVAN – Born June 20th, 1867 in Cork County, Ireland, Ms. Sullivan works as the live-in housemaid for the Bordens. Much like Lizzie, Bridget places herself within alarming proximity to both victims at the time of their deaths. How could anybody reside within the small household and not hear the commotion from these brutal assaults? Much like many of the wealthy elite of Fall River, the Bordens were known to have a distinct prejudice against the Irish. Perhaps Ms. Sullivan simply could not take the disrespect anymore, lashing out at her employers. She tried to quit on several occasions, but each time Bridget was bribed back by Abby Borden. What made her so desperate to get away from that house? Maybe she didn’t act alone? Some suspect a conspiracy amongst Lizzie and Bridget, as they were the only two in the household who survived the morning of August 4th. The two women maintain their stories as part of each other’s alibis.

DR. SEABURY BOWEN – Born July 22nd, 1840 in Attleboro, Massachusetts, Bowen is a physician and decorated Civil War surgeon. Dr. Bowen lives directly across the street from the Bordens and is also the family doctor. Seabury caused quite a stir amongst the residents of Second street, as he was often seen escorting Lizzie Borden to church. Being a married man, this was considered scandalous and his friendship with Lizzie thought of as very odd. Did Dr. Bowen take pity on Lizzie, and in an attempt to free her from her frugal father take matters into his own hands? 24 hours before her own violent murder, Abby Borden desperately tried to convince Dr. Bowen that her and the entire family had been poisoned, as they had all been severely ill for several days. She pleaded for help, but it fell upon deaf ears for several days. She pleaded for help, but it fell upon deaf ears for Bowen dismissed the matter as mere food poisoning. Not only was Bowen the very first doctor to arrive at the Borden home, making it easy for him to tamper with the scene or hide evidence but he continues to raise suspicion as he repeatedly seems to try and deter the investigation, even throwing potential evidence into the fire. He further complicates the matter by prescribing Ms Lizzie a heavy dose of morphine while she is being interrogated, making it very difficult for her to answer questions. Why would the family doctor involve himself to such a high degree? Is he protecting Miss Lizzie, or perhaps trying to cover-up his own bloody involvement?

RUFUS B. HILLIARD – Born May 5th, 1849 in Pembroke, Maine, elected City Marshall of Fall River in 1886. Hilliard acts as the lead investigator for the Borden murders, and is present at the scene following the discovery of the bodies. On the morning of August 4th he places himself in Warwick, Rhode Island with the rest of the department celebrating their yearly clam boil. Suspiciously, this information was made readily available to the public, opening the door to endless possibilities for crime and violence in the city of Fall River. Is this an unfortunate misjudgment, or a carefully concocted plan and an intentional offering of opportunity? Following the murders Hilliard very aggressively persues Ms. Lizzie as his prime suspect, denying the possibility of any other culprit. Is this a frantic attempt to cover up something much more sinister that runs even deeper than we imagined? Perhaps Hilliard is intentionally misleading the investigation to frame Lizzie. Is it possible that this conspiracy goes straight to the top?

Here's a sample of what you can expect to find when you open up the game box. 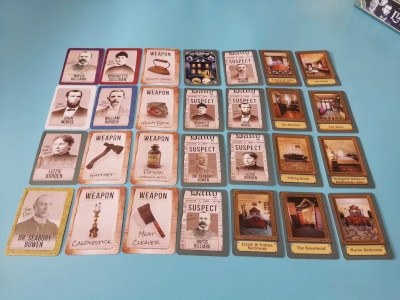 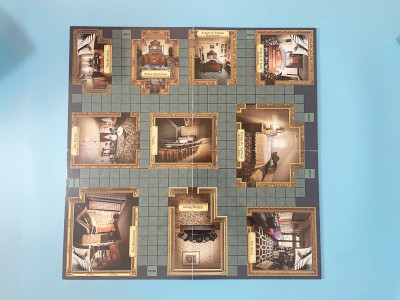 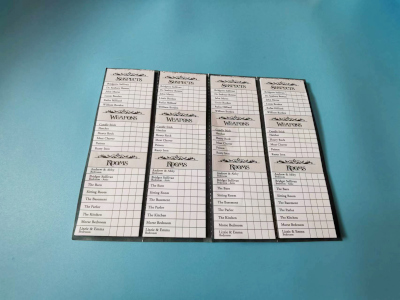 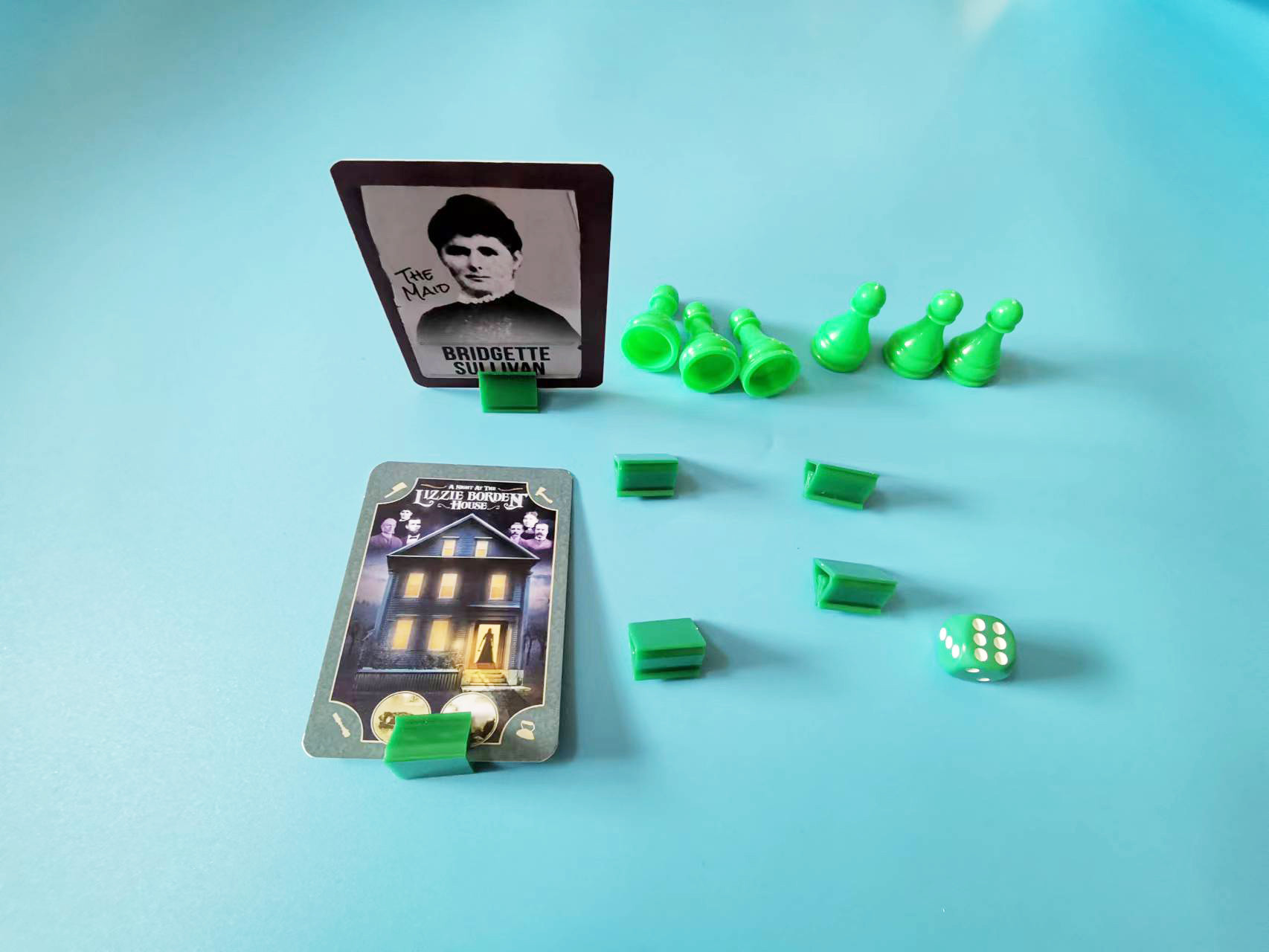 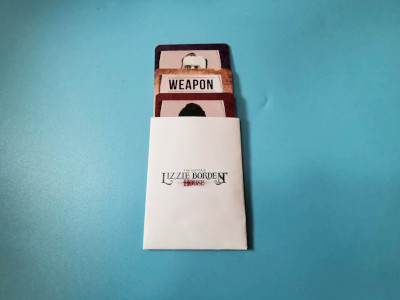 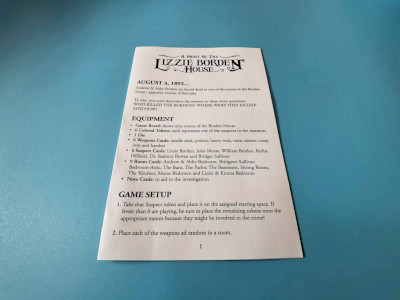 Stay Up To Date

This page will always be updated with the most recent information. Check back often!