Greetings, detective. As Pinkerton’s top investigator, you’ve been assigned to solve a brutal and mysterious double murder in Fall River, Massachusetts. You’ll interview the suspects, examine various clues and evidence presented in different areas of the property, and speak to witnesses. Hurry, this murder is fresh, and we must get to the bottom of these murders!

Step back in time to 1892 to meet the characters from the case, make your way through the border property, and solve the crime! This adventure game can be taken either walking about through your neighborhood or sitting at home- the choice is yours! Compete with friends to see who can be the first to solve the mystery, or work together to solve the crime. 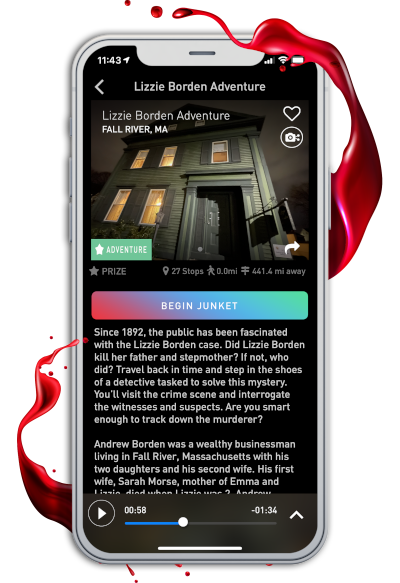 How does the game work?

This is an app-based game that can be taken anywhere. The game is an interactive, decision-based game taken on your iPhone or Android device that will allow you to make your way through the Borden property to uncover the killer – or killers! Use your wit and detective skills to analyze clues, view evidence, and interrogate witnesses. Can you solve this ghastly unsolved mystery?

In the game, you will speak to witnesses. After speaking with each witness, you will be presented with a series of choices to make. Each choice will take you to a new area of the Borden property to speak with a different character. Make your way through the maze of choices and information to uncover the culprit

How do I play? Get The Game 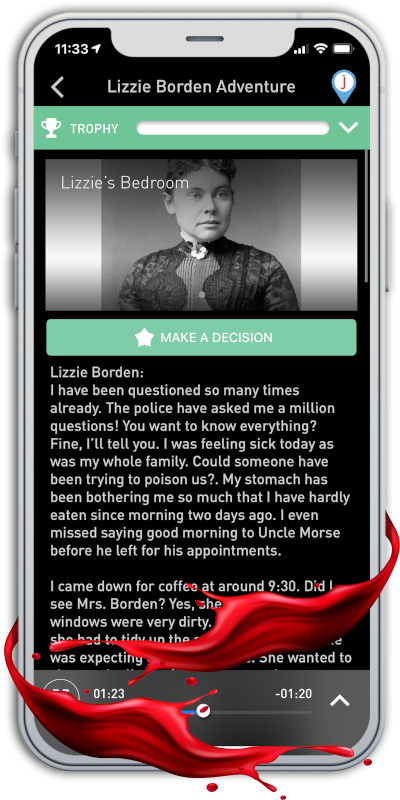 Purchase
Purchase the adventure using the “Get The Game” Button, or get it straight from the Junket app.

Play
Launch the game from your confirmation email (if you buy using the button), or buy from the app and launch it there.
*Once you start the game, you have one week to use it.

As a Junket adventure, each character will be assigned to a point of interest nearest your current location. The adventure is meant to be played outside, as you walk to speak to each witness. The faster you solve the mystery, the more points you will earn. Race against a friend to see who finishes first, or work together. Earn enough points and win a trophy that can be redeemed for a free virtual tour.

As you approach each character, the app will trigger the story based on your location. You may listen to the audio, read the text, or watch the video. Once you have analyzed all the clues, you may make a decision. Each decision will take you to a new destination to unravel this mystery.

Or, take from home

Don’t want to go outside? Not a problem, the adventure can be taken inside without moving from place to place. Simply press the skip button when asked to move to the next location.

Andrew Borden was a wealthy businessman living in Fall River, Massachusetts with his two daughters and his second wife. His first wife, Sarah Morse, mother of Emma and Lizzie, died when Lizzie was 2. Andrew remarried Abbey 2 years later. By all accounts, Emma raised Lizzie, as Emma was 10 years older. Andrew was very frugal.

Despite being worth about $15 million in today’s dollars, the family didn’t have indoor plumbing and lived in a modest house that Andrew had converted from a tenement building. Andrew worked hard to make his money, starting as a carpenter making caskets, and investing in businesses along the way. At the time of his death, he owned a bank, factories and had a building under construction. That building, called the AJ Borden Building, still stands.

Lizzie and her sister wished to live in better circumstances and pushed their father to improve their living conditions, dresses and social circles. They didn’t befriend their maid, calling her “Maggie,” the previous maid’s name, instead of her actual name, Bridget. They also referred to their stepmother as “Mrs. Borden.” In the days leading up to the murders, Emma had been away visiting friends. She only returned after the murders had been discovered.

Also in the days leading up to the murders, all the residents of the house had fallen ill with stomach symptoms. This has led to speculation that they had been poisoned.

The night before the murders, Tuesday night, Lizzie and Emma’s uncle John Morse came to stay with the family. He was there to discuss a business matter with Andrew.

Abbey Borden was killed Wednesday morning between 9:30 and 10:15am. She was tidying the guest room of the house. She was struck from the front initially and then fell to the floor. The remaining blows were to the back of her head. Andrew Borden was killed between 10:45-11:10am Wednesday morning, in the parlor of the house. He was struck from the front and brutally battered. It is unusual for a murderer – with the kind of frenzy required for these types of murders – to wait so long in between.

Ever since 1892, when Andrew and Abbey Borden were murdered, people have been fascinated with the case. Did Lizzie Borden kill her father and stepmother? Help solve the mystery of who killed the couple with this adventure. You’ll visit the crime scene and interrogate the witnesses and suspects. Are you smart enough to track down the murderer 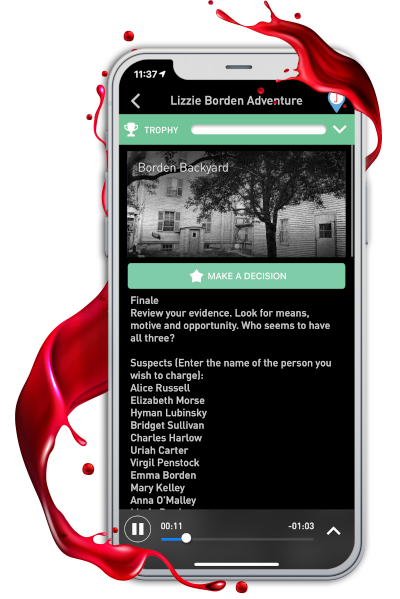