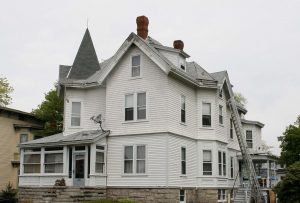 Lizzie Borden’s Maplecroft Mansion was home to the alleged axe murderer for nearly 35 years after being acquitted for murdering her parents.

It’s believed that her spirit hangs on in her beloved home, as well as the home she lived across town where the murders took place. That house is the Lizzie Borden House, offering accommodations and historical tours.

In 1892, Lizzie Borden was accused of murdering her stepmother Abby Borden and her father, Andrew Borden, with a hatchet in cold blood. Although there were several suspects, Lizzie was the only person arrested and tried for the crime.

Imprisoned for ten months, Lizzie stood trial. To the dismay of the entire country, she was acquitted of the crime. To this day, no one but Lizzie knew the exact truth behind the crime. Well, at least not that we know of.

The investigation and Lizzie’s arrest

When the police investigated the crime scene, there was just no hard evidence to be found. Questioning the household members, they began to put together what they assumed to be the events that had taken place. They also decided, Lizzie was the culprit that murdered her parents.

Lizzie was arrested a few days later after a lengthy interrogation. The case went to trial, and despite the conflicting and ever-changing testimonies, and the lack of hard evidence, Lizzie was acquitted by a jury of twelve men and set free.

Many believe the reason behind the murders involved money, which prompted hatred. Andrew Borden was one of the richest men in the city of Fall River. Although this was the case, the man forced his family to live economically with no amenities such as gas and water. Their Fall River home sat in an area of town that moderate-income earners lived. This embarrassed the Borden daughters, who longed for a better life with more affluent means.

His fortune, however, was set to go to his wife, Abby. Abby and the girls had a loveless relationship that was often tumultuous. This, the prosecution pounded into the jurors’ minds, was the best motive for the murders. After all, money is the root of all evil, they say…

Lizzie decided to stay in the Fall River area despite being shunned by the entire town. Emma was the sole inheritor of the father’s fortune until Lizzie was acquitted. She used some wealth to cover Lizzie’s defense, but that was a mere tip of the inheritance iceberg.

When Lizzie was set free, she acquired her portion of the inheritance and fulfilled her dream. The year of her release, she purchased the Maplecroft Mansion located in the upper crust portion of Fall River known as The Hill. A place she and Emma had longed to live their entire life. And a gorgeous mansion it is!

After the acquittal, Lizzie changed her name to Lizbeth. This was to feign away from the reputation she had acquired since the murders. Although everyone knew she was Lizzie Borden, she started a new life under the name Lizbeth. Even her headstone is written “Lizbeth.”

Lizzie lovingly named her home Maplecroft. She and Emma settled into the 1887c, seven-bedroom, three-and-a-half-bathroom luxurious home together. She reportedly had only a few friends but still threw themed parties and entertained in the lavish setting. For the most part, Lizzie lived a secluded life, away from accusing glares of the town folk all around her.

The sisters lived life together in the house for twelve years until a dispute took place, and they parted ways. Emma moved to New Hampshire, and the two never spoke again. It’s uncertain what their quarrel was over, though some believe it involved a man thought to be the boyfriend of Lizzie. No records are clear involving the argument, but it’s said both women lived alone until their deaths, ironically, nine days apart.

Death of the Borden sisters

Lizzie died at age 66 in her beloved home of pneumonia. Her wake was held in the parlor room of the house. Few attended the service, but that was to be expected. Interestingly, one account says Lizzie had prepared a list of invitees to the funeral. When the invites went out, the attendees arrived, however, the funeral was held on a different day.

Sister Emma fell and broke her hip the day Lizzie died. She died from infectious complications from the fall nine days later.

Isn’t that a bit of an eerie coincidence? Perhaps it was Lizzie’s way of telling her sister, “If I go, you go too,” to keep the older sister from ever spilling the beans about the truth of the murders.

Both women are seen at the Lizzie Borden House, only blocks from Maplecroft, where the murders occurred. There is undoubtedly more to the story than meets the eye!

It’s understandable why Lizzie would return to Maplecroft after her death. But why would she return to the crime scene of the murders? Her life was not a happy one at the murder house. Perhaps she wants to clear her name. Or even better, maybe she knows of some evidence missed by investigators and wants to make sure it’s never found…

The monkey at Maplecroft Mansion

From the 1940s to the 1970s, Maplecroft was owned by the Silva family. Frank Silva was nine years old when his family took residence in the home.

He remembers the home an enjoyable place to live despite the neighborhood kids chanting the Lizzie Borden nursery rhyme to him on the way to school:

And gave her mother forty whacks.

When she saw what she had done,

She gave her father forty-one!

It was a bit morbid of a nursery rhyme. Still, it’s a part of Silva’s childhood tied to the house.

The Silva family had an unusual pet when they lived at Maplecroft. The parents had gifted Frank a Capuchin monkey named Rab, and Rab lived in a cage in the kitchen. That’s when he wasn’t out causing mischief Frank says!

Frank’s grandfather passed away in 1953 in Maplecroft. There’s a strong possibility in the same room that Lizzie took her last breath, and he, too, was laid out in the parlor for his viewing. Maybe the unknown ghost that also hangs around the home is him.

If you’re into paranormal investigations, Kindred Spirits is a favored investigative team. Ami Bruni and Adam Berry have been lucky to investigate Maplecroft since Lizzie Borden died in 1927.

The home was being prepared to be opened up to the public. The current owners and tour guides reported an extreme shift in paranormal activity. Touching, disembodied voices of a woman and laughter.

In the investigation, they called in renowned psychic Chip Coffey, blindfolded and unaware of their investigation property. Coffey found himself walking into a flood of emotions of agitation, anger, and sadness. There were obviously spirits in the home, and they weren’t happy with the investigating team being there. The entity was clear about them not getting it to discuss anything it didn’t want to discuss. They soon found out it wouldn’t discuss the murders.

Ami and Adam began their investigation, questioning the spirit about its identity. It promptly responded, “Lizzie Borden.” Later they discovered it actually had answered with “Lizbeth.” They asked whether it was affiliated with the murder house and whether it wanted to talk about it. No response. Chip Coffey told them it didn’t want to have any further conversation.

It was then that Adam suggested they remove all articles relating to the murders from the house and question the spirit indirectly about its identity.

As the team removed items from the house, they spoke aloud, narrating their actions so the spirit would see and hear all they were doing. They talked to the entity using Lizbeth rather than Lizzie out of respect for Lizzie’s decision to change her name. They made it known they would not discuss her past or the murders.

Once the house was cleared, the team began their investigation differently.

Adam, downstairs, asked questions through a walkie-talkie. Ami was upstairs with a ghost box and headphones to not hear anything coming from Adam’s interview. When Adam would ask Lizbeth a question, Ami would say aloud the response.

Adam asked the spirit to tell Ami her name, and it responded, “Lizbeth.”

Adam: “Yes, they’re going to talk to you directly.”

Adam: “The people that own this house now also own the house—”

Lizbeth: Don’t say anything. It’s not me.

Adam: “People are going to ask you about what happened on Second Street. We’re trying to warn you and let you know, to see if that’s okay with you.”

Lizbeth: Please talk to them. Are you there?

Adam: “So you’re saying it’s okay for people to come talk to you about your past?”

At that point, Ami felt someone walking through the room she was in upstairs. But no one was there.

Adam: “Do you miss someone, Lizbeth, from your past?”

Lizbeth: You get used to it. I’m upset.

Adam: “What are you upset about?”

Although the voice was difficult for Ami to hear, she could feel the conflict and loneliness in Lizbeth’s voice.

Ami and Adam believe the most sought-after ghost to communicate with spoke with them because they gained her trust. They never discussed whether or not Lizzie or Lizbeth committed the ghastly murders. A question all want to be answered, but no one will ever get. A story that is a true murder mystery.

Lance Zaal of US Ghost Adventures bought the Lizzie Borden House in Fall River in 2021. It still operates as a bed and breakfast and offers tours as well. If you dare, book a room, and spend the night. Or you may just want to take a historical ghost tour. Either way, it will be a hauntingly good time!

US Ghost Adventures offers historical ghost tours in cities across the country.  Book a walking tour near you or a virtual ghost tour from the comforts of your own home!