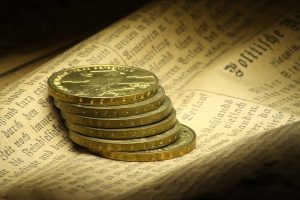 The murders of Fall River’s Andrew and Abby Borden were front-page news in the autumn of 1892. How could a young woman such as Lizzie have allegedly committed such heinous acts? The crime enveloped the town that year, drawing in speculation and mystique, leading to outrageous claims and guesses of why Lizzie Borden had the motive to brutally murder her father and stepmother. An article in the Boston Daily Globe had surfaced; it was a fourteen-column piece telling of damning new evidence surrounding the Borden ax murders. What was the fake news in Fall River?

Countless conspiracies surround the Borden case, many of which have been dissected on internet forums. Some even start intense arguments, the citizens of Fall River claiming the Borden case as their own, protecting it to no end. Claims in that fateful Monday morning article almost led to Lizzie’s ruin – while awaiting trial for the murders, the article stated that Borden was pregnant.

Back in 1892, women of Lizzie’s age were expected to be married, bearing children, and building a home with a husband, all under the watchful eye of God. While it is true, Lizzie was a member of the Central Congregational Church, serving as the Secretary to the Fruit and Flower Mission, and even acted as treasurer to the Young Woman’s Christian Temperance Union. Could Lizzie have really gone against her beliefs and conceived before marriage? This would have shocked the community, echoing back into the Borden household, causing soiled reputations and shunning by the church.

It’s said that Andrew Borden, Lizzie’s father, found out about her pregnancy and was outraged. He had been overheard threatening to banish her from the home unless she told him ‘the name of the man that got you into trouble.’ She refused to answer to her father’s threats, and a day later, Andrew and Abby were found dead in their home. Could this stunning revelation be true?

The morning of the murders, several witnesses had seen Lizzie in the upstairs window where Abby’s brutally beaten body was discovered. She donned a rubber hood on her head, and it was later explained that it was worn to protect her hair from blood spatter. Other witnesses in the town claimed to have heard Lizzie herself offering to pay off her maid in exchange for her silence. She allegedly stated, ‘keep your tongue still, and you can have all the money you want.’

The article had laid out statements of over twenty-five witnesses, surprising since the case was said to have no witnesses, to begin with. The story filled almost two pages of the paper with damning evidence – Lizzie’s hatred toward Abby, her stepmother. Inquisitions about her father’s will, her suspicious comments, and behavior in the hours after the murders… who was responsible for this story chock-full of never-before-heard evidence against Lizzie?

His name was Henry G. Trickey (an accurate foreshadowing), a 24-year-old star crime reporter for the Boston Globe. He claimed that he had spent six weeks gathering every single ‘fact’ of importance and shred of evidence he could find. He said his story came straight from the files of detectives on the case. How in the world could such a young reporter have gotten such incriminating evidence handed to him on a silver platter?

Trickey was born in Dover, New Hampshire, and was hired as a reporter for the Tribune in Cambridge, Massachusetts, at the young age of 17. Later, he found work with the Boston Globe and would eventually author the article that could have flipped the unsolved Borden case on its head.

The only issue with the city-shattering scoop? Hardly a single word of it was accurate. Fall River’s first case of fake news was hot off the presses.

A Hoax of A Story

Newspaper hoaxes were widespread during the 19th century as rivalries ran rampant and ‘exclusive’ stories were written carelessly to boost circulation. The Borden story itself was the truth, and Trickey and his editors were convinced that their information was accurate. They had compelling details, names, and addresses of witnesses, even their occupations. Trickey was even considered to be the most accomplished and trusted reporter by his peers and leaders. By the time he had covered the Borden murder case, he had written about over sixty other homicides for the Globe, earning the title of ‘the murder man’ at the Boston Globe newsroom. This was his specialty, his livelihood – how in the world could Trickey let these falsehoods slip through the cracks?

After the story broke, the town was shaken. Mob scenes at the newspaper stands were described in detail, doubts of Lizzie’s guilt and innocence were proclaimed, Fall River was cracked open, and the Borden case was the juicy center of it all. Suddenly, Lizzie’s outward persona was brought into question, her scandalous double life exposed, new motives for murder brought into question – protecting a secret lover, the shame of a pregnancy out of wedlock, and her threatened banishment from the household and the will.

Borden’s lawyer, Andrew Jennings, got ahold of the story and denounced the allegations as false and “trumped-up.” Rival newspapers in Boston fought back with stories about the false allegations, and within twenty-four hours, the Globe has acknowledged the falsehoods. Lizzie’s pregnancy was brought to light when her family doctor confirmed that Lizzie was not pregnant and had never been pregnant. It seemed as if Trickey and his editors didn’t check with Lizzie’s doctor before publishing that detail. By late afternoon on October 11th, the Globe had retreated. Much of the information given in the original article was now confirmed as false and ‘should have never been published.’ A front-page apology was issued to Lizzie and readers for ‘the inhuman reflection upon her honor as a woman.’ A powerful statement for a woman amid a murder trial.

The Globe: Not Guilty

The newspaper itself refused to take full responsibility for the falsehoods, proclaiming its honesty and integrity, stating it was as much a victim as Lizzie. It claimed that Trickey and its editors had been misled. In a statement given by Trickey, it was described that he had purchased the information for $500, about $12,000 by today’s standards, from Edwin D. McHenry, a private detective who had assisted police during the investigation.

With fears that the McHenry would sell the information to a competitor, Trickey and the editors of the Globe made no attempts to verify allegations before publishing the story.

McHenry later stated that he gave the false information with the blessing of the Fall River Police Department, who suspected Trickey was feeding confidential information to Borden’s defense lawyers. The leak was an elaborate ruse to catch Trickey passing along details that belonged to the prosecution. McHenry stated that he needed 24 hours’ notice before the Globe published the details, but Trickey decided against waiting. The hoax may have been nothing more than payback, as Trickey and McHenry were not on friendly terms, as they clashed while investigating a high-profile murder case in Colorado earlier that year.

The article did not sully Lizzie’s reputation; it ended up favoring her. Her supporters took the story as proof that an innocent woman was being prosecuted and that any further evidence would be scrutinized. The story made it hard to know who – or what – to believe. The waters were muddied, Lizzie was made to be a figure of sympathy in the eyes of the public. With no proven eyewitnesses or physical evidence linking her to the murders, a jury deliberated for about an hour before she was declared not guilty.

A grand jury indicted Trickey in the winter of 1892 with a charge of witness tampering. Trickey fled to Canada to avoid prosecution and used his wife’s maiden name Melzar to stay under the radar. In a bizarre twist of fate, a day after the indictment was announced, he rushed to catch a train pulling out of a station in the city of Hamilton, Ontario, when he lost his grip on a handrail and slipped under the train’s wheels. He died almost instantly. Instant karma? You can decide that one for yourself.

The Lizzie Borden case was just the tip of the iceberg in Fall River’s unique history. Even today, speculation surrounds the Borden case, and it remains one of the most famous unsolved murder cases this side of the Mississippi. For another Fall River unsolved murder, check out our article about Sarah Corwin and the man-of-god who allegedly murdered her in cold blood.