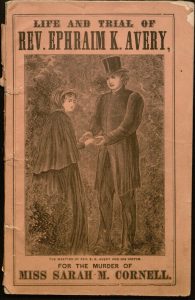 Fall River and Lizzie Borden go together hand-in-hand. Even if you’re not a Fall River native, just hearing the town’s name is enough to send chills down your spine. But the Lizzie Borden case isn’t Fall River’s first unsolved murder case. Sixty years before the murders of Andrew and Abby Borden, 200 years ago now, the life of a mill girl named Sarah Maria Cornell took a tailspin, and the history behind her untimely and gruesome death will leave you with more questions than answers.

News reports from December of 1832 state that a farmer was driving his head of cattle across his farmland when he stumbled upon the body of a young girl, hanging from a pole in a haystack yard that is now part of Fall River’s Kennedy Park. This girl turned out to be Sarah Cornell, and at first glance, it had appeared she had committed suicide.

Soon, it is evident that the young lady hadn’t taken her own life – someone took it from her. Who could do such a thing? A suspect was found in the least likely of places… the church.

Minister Ephraim K. Avery was a person of interest in this case, and it was revealed that he and Sarah had a tortuous on and off again relationship. Even more intriguing, it was discovered that Sarah was pregnant, and Avery was the father. At the time of her death, Sarah was four months along. One can assume the background of their relationship, with Ephraim being a married man of God, and if anyone were to find out he’d been having an affair with a mill girl, his entire life and reputation would be soiled. A motive for murder, perhaps?

Evidence quickly began to stack up against the Reverend when a handwritten note was discovered, written by Sarah. The note read,

‘If I should go missing, inquire of the Reverend Mr. Avery of Bristol. He will know where I am.’

The note was dated December 20th, the same day that Sarah was murdered. Other suspicious and incriminating letters were found, as well as a conversation she had with a doctor that Avery was the father of her unborn child. These chilling words from the dead rocked the town, and Avery ultimately stood trial for the murder of Sarah, but the Reverend had a few tricks up his sleeve.

In court, his defense team called twice as many witnesses as the prosecution, and Sarah’s character was destroyed in the courtroom. Sarah’s past was brought up, including that she had gotten into trouble for theft as well as other ‘inappropriate’ acts for a woman of her time. It couldn’t be true; this Reverend, a loving husband, and man of the church couldn’t be guilty of such a heinous act, could he? Avery eventually walked away from the whole situation as a free man. The people of Fall River were outraged, and rumors swirled that one of the justices was a Methodist and set Avery free in an attempt to quell the scandal.

No one else was ever charged or tried for the murder of Sarah Cornell. Local historian and author Rory Raven wrote a book titled ‘Wicked Conduct’ which detailed Cornell’s death. Rory states that:

‘Everything points to Avery so completely. There’s no doubt in my mind this guy was guilty as sin. He just beat the rap, and he shouldn’t have.’

Revered Avery fled town soon after the trial, his reputation scarred by the trial, the public revoking their trust for him; he was forever scorned in the eyes of Fall River’s residents. Sarah was buried on the farm near where her body was found, but it wouldn’t be her body’s final resting place.

Strangely enough, Sarah Cornell’s body was exhumed and moved to plot 2733 in Oak Grove Cemetery, the same place where Lizzie, Andrew, and Abby Borden would be laid to rest decades later.