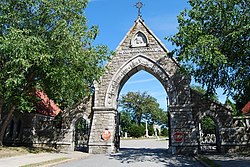 All cemeteries have some haunting, and there’s no exception for the Oak Grove Cemetery in Fall River, Massachusetts.  This cemetery, however, has good reason to be haunted.  And haunted, it most certainly is.

Oak Grove started as a plain and non-expressive place to bury the local dead when established in 1855. In time, however, its looks and designs improved.

Triple arch with a gothic cross, wrought iron gates with swirls and rosettes, the entrance to the cemetery is beautifully carved and decorated in the way of our ancestors before the invention of minimalism.

Rural garden design style like Mount Auburn Cemetery in Cambridge, Massachusetts, Oak Grove is the most significant cemetery in the city.  Local architect Josiah Brown designed and laid Oak Grove Cemetery.  He is also known for his designs of early mills of Fall River, including Union and Border City.

The most popular occupants of the cemetery are an entire family involved in an unsolved murder mystery that has gone down in history.  That would be the Borden family.

Also buried in Oak Grove Cemetery is Andrew Jackson Jennings, defense attorney for Lizzie Borden during the murder trial of her parents, Andrew and Abby Borden.  However, Andrew and Abby aren’t the only murder victims buried in the cemetery.

Born May 3, 1903, Sarah Maria Cornell was the daughter of James and Lucretia Leffingwell Cornell.  Lucretia, daughter of an old puritan well-to-do family, was disowned by her father for marrying James.  James had worked at Lucretia’s father’s paper mill, and Mr. Leffingwell found James highly unacceptable to marry his daughter.

At age nineteen, Sarah’s life took her in a different direction. She began working at various mills in Connecticut and Rhode Island. She was often in trouble for theft and “inappropriate” actions for a woman during those times.

Between 1823 and 1826, Sarah sought out to change her ways and converted to Methodism.  Little did she know this conversion would seal her fate.

Working as a weaver between 1828 and 1829 in Lowell, Massachusetts, Sarah met the town’s new minister Ephraim Kingsbury Avery.

After moving around a bit, in August 1832, she attended a Methodist Camp Meeting in Thompson, Connecticut. Again, she crossed paths with Avery, and Avery was now a Minister of the Methodist Church in Bristol, Rhode Island.

The Death of Sarah Cornell

In October of 1832, Sarah moved to Fall River.  Sarah was now clearly showing signs of pregnancy.

On December 21, 1832, John Durfee found Sarah Cornell beaten to death and hanged from a post. Sarah was murdered, and it was clear who the killer was.

Among Sarah’s belongings, a note was found that said:

“If I should be missing, enquire of the Rev. Mr. Avery of Bristol, he will know where I am.”

Also found, incriminating letters. Sarah also had a conversation with her doctor, indicating Avery was the unborn child’s father.

The Autopsy of Sarah Cornell

Sarah was buried on the Durfee farm, where her body was found. A coroner’s jury was called before any autopsy had taken place. Her death was ruled a suicide “due to the influence of the wicked conduct of a married man.”  Sarah’s body was then exhumed from her grave for an autopsy.

The autopsy revealed Sarah was four months pregnant. A second coroner’s jury overruled the suicide and changed it to murder.  Ephraim Kingsbury Avery, a married Methodist minister, was arrested and charged with Sarah’s murder.

The Methodist church refused responsibility to bury Sarah; she was only a probationary member. Her body had already been exhumed once for autopsy.  Fall River Congregationalists assumed the responsibility and buried Sarah as an indignant on Christmas Eve.

The town was outraged and raised money to help with the investigation. Avery was indicted in March 1833 and pled not guilty.

The Trial of Minister Avery

The Methodist church led the defense using a strategy of Sarah’s promiscuity, mental stability, and corrupt life.  The prosecution’s strategy involved an attempt to portray the clergy of the Methodist church as a dangerous, secret society that would defend their minister and the good name of their church at whatever cost.

In the end, Avery was acquitted of the murder of Sarah Cornell.  He went on as Minster of the Methodist church. However, the out lash from the townspeople sent him packing as a minister in 1836. Avery could never redeem his reputation.

Sarah’s grave was moved to Oak Grove Cemetery in 1868.  It’s not certain that Sarah is one of the ghosts that linger in the cemetery. However, the sadistic murder and no justice for her and her unborn child would be reason enough to haunt.  Not to mention the fact that Sarah’s grave was dug up twice.

The most popular grave visited in the cemetery belongs to none other than Lizzie Borden.  Her father, Andrew Borden, and stepmother Abby Borden were brutally murdered with an axe in their home in 1892.  Lizzie and the housekeeper were the only two at home at the time of the murders. Or so they said.

Investigations eventually led to her arrest.  She was tried for the murders and acquitted in 1893.  The murders received notoriety, not only because of the gruesome act, and the mystery of who committed the crimes is just that—a mystery.

A jury found Lizzie Borden innocent of all three charges. A case of circumstantial evidence, lack of evidence, changing stories, and outright lies.

After being acquitted of the murders, Lizzie legally changed her name to Lizbeth.  She wanted a new life away from the public scorn of the murders and trial.

Lizzie died in 1927 at age sixty-six from pneumonia and is buried with her family.  An odd detail, had she committed the crimes.

Andrew Borden was a man of great wealth but frugal in means. His fortune was the most logical motive for his murder.  Andrew, known as a humorless, astute businessman, had few, if any, friends.  The only real friend he did have was his dead first wife’s brother. Coincidentally, he was visiting the Borden family days preceding the murders. Despite his strange behavior when questioned, his alibi checked out.

Strange lights are seen in the cemetery near the Borden’s graves. It can’t be Andrew Borden.  He wouldn’t even provide his household with electricity while he was alive, so it’s doubtful he uses any modern conveniences in death!

Abby Borden was the second wife of Andrew Borden and the second victim in the gruesome murders in the Borden household.  Although there is much speculation as to why someone would want her dead, the most common belief is she stood to inherit old man Borden’s money if he died before her.  That would leave the Borden daughters out of the picture unless she died.  Some say Lizzie and her stepmother got along fine, while others say there was discontent between them.  Either way, it was overkill for both victims, but double overkill for Abby who received nearly twice as many blows as Andrew.

Abby is buried alongside her husband, Andrew.  People report the sounds of screaming near the Borden plots.  Perhaps Abby is eternally tormented by the brutal hacking she received, resulting in her death.

Emma Borden, Lizzie’s older sister, died in 1927, just ten days apart from Lizzie.  After Lizzie was acquitted, she purchased a mansion in the upper-class neighborhood of Fall River.  She and Emma lived together in the mansion Lizzie named “Maplecroft” for twelve years before Emma moved out.  There are no records of the sisters ever having contact again.  Like most speculation about the entire family, many feel their falling out had something to do with the murders.  There’s more to the story than meets the eye. Perhaps sister Emma was indeed involved in the murders even though she was away when they happened. Or, at the very least, knew what happened.  However, if she did know anything, she took it to her grave.

At the Borden’s graves, there’s an eerie feeling of being watched.  Sounds of disembodied moans and cries permeate through the grounds, and unseen dark energy is felt by many.

Those buried at the Oak Grove Cemetery include members of Congress, elite members of the community, and even major league baseball player Charlie Buffington.  However, the fact remains that there are three known murder victims buried within those gates.  Most likely, they are at least part of the hauntings in the cemetery today.

The Lizzie Borden House is a Bed and Breakfast and museum that offers tours in the house and Oak Grove Cemetery.

Schedule a stay at the haunted inn (if you dare!) or book a tour today!